Detect events in the Office 365 environment and take action to respond to a breach. We used to respond to unplanned issues that would interrupt our other work...Just being reactive was untenable. Now, we're being proactive, and are much more scalable. 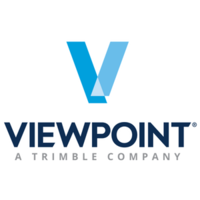 A user logs in from an unexpected subnet. A server experiences repeated login attempts from the same IP address. An account authenticates from Moscow two hours after logging in from Atlanta. If such anomalies go undetected, attackers can eventually seize Command and Control of machines, hop off to more lucrative financial systems, and execute code to create significant data breaches.

In their lighthearted take on a serious topic, Verizon’s “Data Breach Investigation Report” showed server security breaches in decline, but only in relation to the quickly growing device and person categories.  User/person attacks are rising due to malware and because users are falling prey to phishing.

Percent of Breaches Per Asset Category 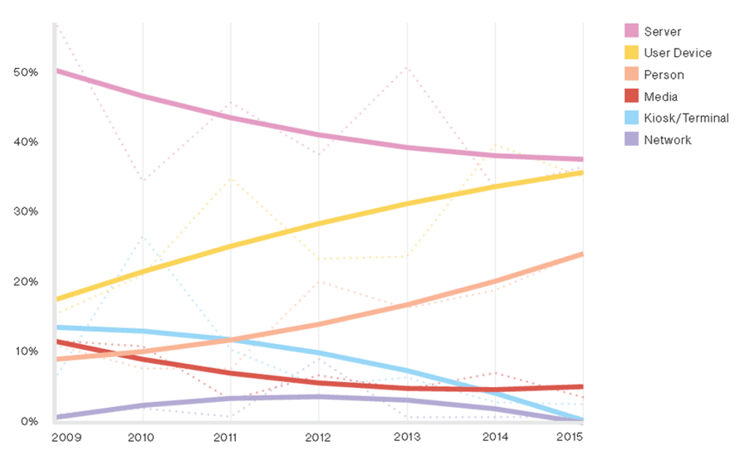 Microsoft’s made significant investments in end user security, including rolling out Advanced Threat Protection to all Office 365 E5 subscribers.  And as of June 2016, another layer of security, called Advanced Security Management, was added to Microsoft Office 365.  It’s automatically a part of the E5 bundle, or can be purchased a la carte for $3/user/month.

Advanced Security Management allows you to:

Using Advanced Security Management allows the Security team to be better informed about events occurring in the Office 365 environment, and enables them to take action to avoid or respond to a breach.  Policies can be set up to watch for general anomalies or very specific ones.  Responses can vary from alerting an administrator to locking a potentially compromised account.

The configurations are made in the Compliance Center within the Office 365 Admin Console.  The rules are actually stored in Azure, because Advanced Security Management is a stripped-down Office 365 version of Cloud Apps Security, the service that tracks SaaS usage and allows organizations to bring that under control.

Below, you can see that one “General Anomaly” policy is already set up by default, which is looking for anomalies against the baseline threshold.  Two specific policies are also configured. 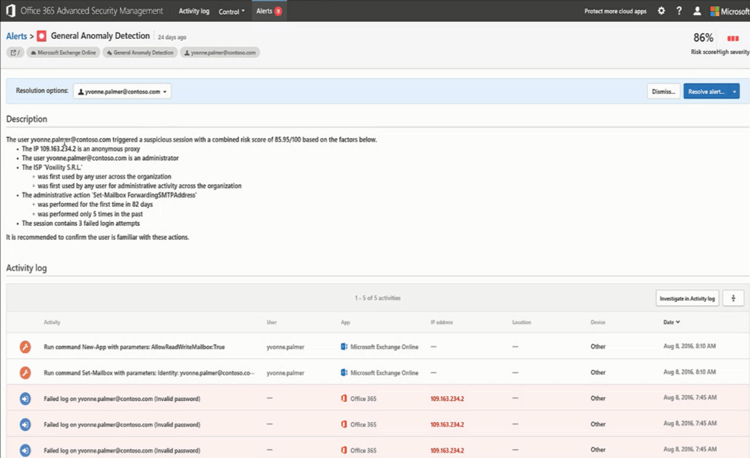 When an anomaly is detected, an administrator can analyze the cause.  An example alert triggered by the general policy is shown below.  It shows that an admin’s account was used to log in from an anonymous proxy, via an unknown ISP, and ran a rare command.  All these oddities together combined for a combined risk score of 85/100, enough to cause an alert. 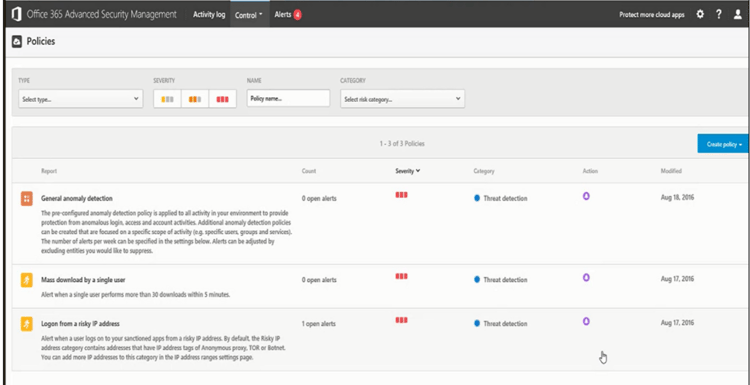 Given such a Maltov cocktail of events, an administrator could respond by deactivating that account immediately, or drill down. If that IP address, for instance, was the source of attempted logins to multiple accounts, an administrator would know to take a different course of action.

Additional rules can be created for more narrow cases where an organization has concerns.

Advanced Security Management improves your risk profile, by alerting and even shutting down accounts when access is compromised.

For more info about keeping attacks from happening, return to our security landing page or look at the DLP/Identity Management capabilities in Office 365.

A Maturity Model for Collaboration

The Impetus for a Model There’s no shortage of productivity tools, but there is little means of judging their efficacy. Despite spending time and money on tools and technology, IT leaders still...
Read More

Why I joined Enabling Technologies

Finally! A way to remove the last Exchange Server

Have you completed your migration to Exchange Online?  Many years ago…good for you.  But you are still running and Exchange Server on-premises, why?  Recipient Management, ok, seems a bit overkill to...
Read More

When Microsoft  released its Office 365 Secure Score in mid-2017, it promised to be a helpful roadmap for IT Pros to secure their O365 environment. 18 months later, O365 tenants are still woefully insecure.  Contact us to see what you can do to improve your organization's Secure Score.